HyperGH 14x™ is such an effective HGH release system because of the series of powerful ingredients that work together to stimulate the pituitary gland to naturally boost the release of growth hormone…both during rest periods as well as before, during, and after your workouts.

To NATURALLY optimize the biological HGH releasing rhythms during exercise, rest as well as when you sleep, two doses of HyperGH 14x Daily Supplement is all it takes. You are actually taking two capsules twice per day for a total of four daily capsules delivering 4,040 mg of potent HGH precursors into your system.

In clinical studies, it is found that L-Arginine has boosted the growth hormone levels as much as three times, even in later years. It is also known to improve exercise performance for high-intensity, short-duration workouts.
L-Arginine is an excellent HGH precursor that increases fat burning, builds muscle tissue, promotes healing, boosts immunity, fights cancer, enhances male fertility, and more. As the body doesn’t produce arginine naturally, it must be taken through diet.

An important amino acid that is used by the thyroid gland for producing Thyroxine, Tyrosine is found to be correlated with reducing depression and fatigue and also regulating growth and metabolism.

A key to metabolism, cell division, and cell growth, L-Glutamine is the amino acid used most by your body during times of stress. It is also important for the maintenance of muscles, energy, and mental alertness.

Studies have found that the right amount of L-Glutamine in the body boosts immunity, manages cholesterol and blood pressure, and reduces the risk of heart diseases, diabetes and arthritis.

L-Glycine is one of the key HGH precursors that stimulates the pituitary gland to secrete growth hormone more frequently. It also has a calming effect on the brain and may play a role in prostate health.

A booster to the L-Arginine functions, when taken in combination with Arginine, L-Lysine has shown to be 10 times more effective than just taking L-Arginine alone. Like Arginine, it is reported to boost immunity and improve genital function, too.

Astragalus is a natural herb that seems to stimulate and increase the immune system. It is found to be effective in improving kidney function as well as controlling diabetes.

Another natural extract, deer antler velvet is rich in glucosamine, chondroitin, and collagen. In clinical findings, all these ingredients have been shown to help reduce joint pain and also slow down the aging of the joints.

Gamma-Aminobutyric Acid (GABA) is a powerful amino acid that stimulates the production of HGH. It is a classified neurotransmitter that is known to improve the neural network as it helps the nerve impulses cross the nerve synapses or gaps to communicate better. This results in a number of positive effects on the nervous system.

In natural form, colostrum is a form of milk produced by the mammary glands of mammals in late pregnancy and a few days after giving birth. HyperGH 14x™ includes bovine colostrum, which is virtually identical to human colostrum. It includes all the benefits of colostrum produced by humans.

A highly potent amino acid found in high concentrations is muscles, L-Valine is not produced by the body, which is why it must be compensated with food or dietary supplements. This amino acid is crucial for muscle metabolism, tissue growth, and repair and maintaining the nitrogen balance in the body.

As a branched-chain amino acid, L-Valine is used as an energy source in the muscles and in doing so, preserves the use of glucose.

Anterior Pituitary Powder is a potent stimulant that improves the efficiency of the pituitary gland and increases the release of HGH. Furthermore, it is found to be effective in improving muscle tone also help improve some conditions associated with aging.

Phosphatidyl Choline is a purified extract from lecithin which acts as an excellent emulsifier to facilitate the absorption of the other nutrients included in HyperGH 14x™.

Also, Phosphatidyl Choline helps in breaking down the fat deposits in the body, reducing the risk of gallstones, heart disease, liver problems, and atherosclerosis. It may also prevent depression, memory loss, and neurological disorders.

In several studies, L-Ornithine is found to be approximately twice as effective as L-Arginine, which, as we mentioned before, can as much as triple your HGH levels. For this amino acid to supercharge your HGH production it needs to be used in combination with L-Arginine, L-Lysine, and L-Glutamine, also included in HyperGH 14x™!

GTF chromium controls glucose levels by enhancing insulin activity in the body. It is also required to transport glucose from the blood into the cells. By lowering the blood glucose levels, GTF Chromium also increases the release of HGH. 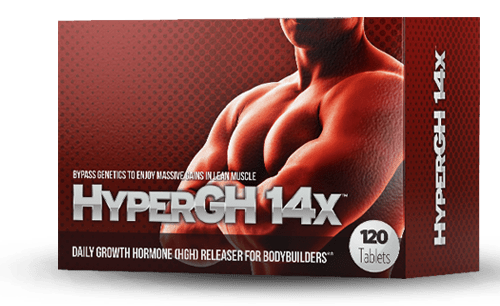 With HyperGH 14x™ Oral Spray, you are getting the most cutting-edge discoveries in the science of HGH releasers known as Alpha GPC!

When you supplement with Alpha GPC, you achieve two significant benefits as a bodybuilder:

First, Alpha GPC acts as a precursor to the neurotransmitter acetylcholine. It is known to activate fast-twitch fibers within your muscles that make for harder, stronger muscle contractions.

Second, in clinical trials, Alpha GPC has shown to…

Increase HGH Release By 4,100% During Workouts!(Compared To A 2.6% Increase *Without* Alpha-GPC)

Plus, it has been shown to improve overall bench press power while reducing post-workout respiratory rate!

Increase HGH Release By 4,100% During Workouts! (Compared To A 2.6% Increase *Without* Alpha-GPC)

With just two doses per day of HyperGH 14x™ Oral Spray, first, before your workout (or in the morning) and second before bed, you unleash the benefits.

Each dose is 3 sprays, for a total of 6 sprays daily.